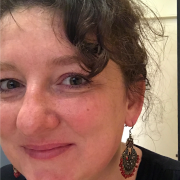 Carolyn Herbst Lewis is a co-founder of Nursing Clio. She is the author of Prescription for Heterosexuality: Sexual Citizenship in the Cold War Era (UNC Press, 2010). Her current project is a history of the Chicago Maternity Center.

Today we have something a bit different: an interview with Professor Astrid Henry by Nursing Clio blogger Carolyn Herbst Lewis. Astrid is the Louise R. Noun Professor of Gender, Women’s, and Sexuality Studies at Grinnell College. She recently co-authored Feminism Unfinished: A Short, Surprising History of American Women’s Movements (W.W. Norton & Company, 2014) with Dorothy Sue Cobble and Linda Gordon, which Carrie Pitzulo reviewed for us earlier this week. Astrid also is the author of Not My Mother’s Sister: Generational Conflict and Third-Wave Feminism (Indiana University Press, 2004), and her work has appeared in various journals and anthologies. She received her Ph.D. from the Interdisciplinary Modern Studies Concentration of the University of Wisconsin-Milwaukee’s English Department and has been a member of the Governing Council of the National Women’s Studies Association.

The editors of Nursing Clio (www.nursingclio.org) welcome applications for new regular and guest bloggers for the site. The editors are especially looking for authors who write about the experiences of women of color and non-US topics. Interested authors should submit original essays of 800-1,500 words that include relevant hyperlinks as well as the author’s bio line, limited endnotes, and a list of further reading. Submissions should be accompanied by the author’s curriculum vitae or resume. Essays should be submitted as word documents (.doc or .docx), and authors should format according to the Nursing Clio Style Guide available on our website. All essays submitted to Nursing Clio are subjected to an open peer review process for content, style, and format. Authors should be sure that their essay is written in a voice suitable for blog publication and reflect the mission of Nursing Clio. Our editorial team welcomes essays based on a broad range of subjects and experiences, including original research, book reviews, memoirs, “Adventures in the Archives,” and other reflections. Submissions or inquiries should be sent to the editorial team at nursingclio@gmail.com

I have a not-so-secret weakness for historical fiction series. I think, in some roundabout way, this is what started me on the path to studying history. I read the Little House on the Prairie books as a child, John Jakes’ North and South series as a tween, and it’s been my genre-of-choice ever since. But there is one series in particular that really is my favorite. Maybe even an obsession. I have no idea how many times I’ve read and reread the now eight volumes in the series. I’ve even considered going on one of those themed-vacations, where you visit sites featured in the books. It’s that bad. My obsession, I mean. The books are simply that good.

When I say that I’m talking about the Outlander series by Diana Gabaldon, I imagine that most of you who have read the books will know what I am talking about. I say “most” because I have heard that there are people who have read the books and didn’t like them. Seriously, what’s not to like? There is adventure. There is drama. There is time travel. There is really great sex. Unlike so many other titles in this genre, the storyline and many of the characters are decidedly feminist. I could go on, but I think I’ve gushed enough to give you an idea of what I’m talking about. Here I actually want to focus on a particular facet of the series: Gabaldon’s careful attention to the history of medicine.

Recently, I taught my first upper-level course on the history of health and medicine in the United States. The course readings covered a broad base, both chronologically and thematically. The discussions that emerged from two of the assigned texts, however, really stand out in my memory. In fact, in retrospect, I can see that they shaped the emergence of an unexpected theme in the course: a critique of both the concept and rhetoric of wellness that is so prevalent in contemporary American workplaces, including many college campuses.

This semester, I taught an introductory-level course on historical methods. One of our tasks was to consider an array of historical materials. We read novels and memoirs; watched documentaries and Hollywood films; read speeches and government policies; looked at architectural plans and advertisements for suburban homes. We even watched an episode of Star Trek. Throughout this exploration, a theme we kept coming back to was how people of the past documented their daily lives. This prompted us to consider how historians of the future will examine our daily lives. What sources will they use? What sources are we leaving behind?

We don’t have water. The pipes running through our walls are dry. I discovered this situation nine mornings ago. I woke to visit Aunt Nellie, as my great aunt would say, and, after contemplating the meaning of life, I rose, I flushed, and I washed my hands. Except where water once flowed at my beck and call, now there was none. By the end of the day, the plumbers would deliver the verdict: no water was reaching our meter, and there was no break in any of the lines. After two bouts with the polar vortex, the temps of the previous few days, hovering right around the zero mark, had allowed the frost layer to reach deeper than it had ever been. Roughly three times deeper, in the estimation of the local farmers. Somewhere along the eighty feet of pipe running between our meter and the city main (most probably the section that had been repaired last summer and thus is now sitting in disturbed earth, but no one can say for sure without exploratory digging), there is a freeze. All we can do is hope for a thaw.

One of the writing assignments that I use in my American women’s history class is a series of primary document analyses. Each one uses a different digital database or archive to locate a document and analyze it using course materials. I like to imagine this is building twenty-first century research skills and teaching responsible use of the Internet, as well as our more traditional goal of critical thinking skills. As I was constructing the assignment, I explored several digital repositories, including the North American Women’s Letters and Diaries collection from Alexander Street Press. In the process, I stumbled upon an item that very quickly sucked me in. I had no choice but to drop everything else and read it very, very carefully.

There is much talk these days about girls and STEM – Science, Technology, Engineering, and Mathematics. In 2009, only 24% of scientists and engineers were women. This is not surprising, given the fact that women comprise only about 17% of the students earning degrees in these subjects, as compared to the 79% of students earning bachelor’s degrees in education. There are material benefits to building careers in STEM. A woman in a STEM-related career earns, on average, 33% more than a woman in a non-STEM field. Given the continued gender wage gap, and the high numbers of women in poverty in this country, it makes sense to encourage an interest in STEM. How to do so has been the tricky part. Colleges and universities — as well as prospective employers — actively recruit women to enroll in STEM programs. But getting young women interested in these fields has been more difficult. The old maxims that girls don’t pursue these interests because “Math class is tough,” and their brains are not “hardwired” for it, no longer suffice. Researchers have found ample evidence that demonstrates that it is a combination of gender conditioning and a lack of role models that make girls feel that they don’t “belong” in STEM. This isn’t just about finding gender equity in the workplace or the college classroom, then; it’s also about reframing the gendered messages we send to young girls and women about femininity and science.

Lately I find that my mind is muddled. I have accepted a position at a new institution, so both professionally and personally there are big changes ahead. In the meantime, I am caught in that strange space in-between. I am finishing up projects and responsibilities here, even as I am already making plans and thinking about my courses there. I look around my home and my campus office and all I see are things that need to be put into boxes. It is a strange time in which beginnings and endings are all tangled into one busy mess. No wonder it’s hard to get anything “done”.