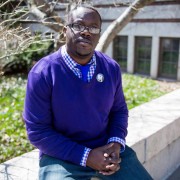 Austin C. McCoy is a Phd Candidate in History at the University of Michigan. He is writing a dissertation on progressives’ responses to plant closings and urban fiscal crises in the Midwest during the 1970s and 1980s.

Reports of a deal between Democrats and Republicans to avert the so-called fiscal cliff finally surfaced a few hours before they all turned to pumpkins at midnight. I know I am not the only one who grew tired of hearing about the fiscal cliff, curb, or whatever metaphor you used to describe the crisis. Actually, I learned that I did not want anything to do with this when I sat down to write because the fiscal cliff negotiations were tiring, and frankly, rather annoying. Yet, in all of my annoyance, the outcomes of these negotiations had very tangible consequences for anyone receiving unemployment benefits, living on Medicare and Social Security, or relying on their payroll tax cut. Yet, the current deal only postpones sequester for two months, possibly setting up another conflict over long-term budget cuts.[1] This aspect of the deal is the most disconcerting. It means the 2012 fiscal cliff crisis signified just one event in what has become a rolling crisis—a series of failed negotiations and compromises that lead to more failed negotiations, weak compromises, and crises.

President Obama’s recognition of Americans’ struggles while voting seemed unexpected, even with all of the news reports about long lines, defective voter machines, and other voter irregularities.What is even more astonishing, and at this point, pretty tone deaf, is that the Supreme Court may hear another case challenging Section 5 of the Voting Rights Act. Shelby County, Alabama aspires to have the provision overturned on the grounds that it is archaic and unnecessary in an “American that elected and reelected Barack Obama as its first African-American president.” Section 5 forces particular states with histories of voter disenfranchisement to seek “preclearance” from the Department of Justice before changing voting rules. Conservative justices, according to Adam Serwer writing for Mother Jones, argue that the law discriminates against white southerners despite the fact that Section 5 applies to “all or parts of” Western and Northern states such as New York, New Hampshire, California, and Arizona, nor does it single out white individuals. States and “political subdivisions” are the regulated entities.

Long before Jesse Jackson, Hillary Clinton, or Barack Obama, Shirley Chisholm launched a campaign for the presidential nomination of the Democratic Party. Unfortunately, we rarely mention her efforts when we look at the history of U.S. presidential politics in the last forty years. It would seem easy to forget how Chisholm blazed the trail for the likes Jackson, Clinton, and Obama after Clinton’s and Obama’s 2008 nomination battle. But the sexism that Hillary Clinton endured and the racism that Obama faced in 2008 arose from a longer context of racism and sexism structuring the outcomes of U.S. party and presidential politics. Chisholm stood as the first to confront the closed nature of national (and black) politics. Defending her campaign to the broader Democratic Party would seem par for the course; yet, Chisholm also battled the established black male leadership in quest to secure the nomination. In doing so, however, “Fighting” Shirley Chisholm, as she called herself, utilized various political styles and strategies seen in later candidates like Jackson, Clinton, and Obama.

Women speakers made the greatest impact on the first night of the Democratic National Convention. Clearly the Democrats aimed to exploit the Republican Party’s woman problem. Women like veteran Tammy Duckworth, republican defector Maria Ciano, NARAL president Nancy Keenan, Health and Human Services Secretary Kathleen Sebelius, Lily Ledbetter, citizen Stacy Lihn, and Michelle Obama, all ventured to speak explicitly about a range of policies that the Republicans remained vague about during the RNC last week. Many of them explicitly placed very controversial issues like income equality, contraception, and Obamacare on the table, and not just during the early evening speeches, but during prime time.

On June 3, Hot97 DJ Peter Rosenberg took to the stage at MetLife Stadium to address the crowd at the radio station’s annual hip hop concert, Summer Jam 2012. While warming up the crowd, Rosenberg shouts, “I see the real hip hop heads sprinkled in here…I see them. I know there are some chicks here waiting to sing ‘Starships’ later – I’m not talking to y’all right now…I’m here to talk about real hip hop.”[1] Rosenberg’s comments referred to Nicki Minaj’s hit song. In one swift moment, Rosenberg not only alienated Minaj and her fanbase, he drew the line between “real” hip hop and “pop” not just in terms of aesthetics, but in a disrespectful, public, and gendered manner.