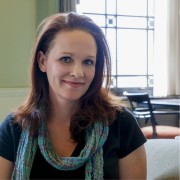 Jacqueline Antonovich is an Assistant Professor of History at Muhlenberg College. Her current research focuses on women physicians, race, gender, and medical imperialism in the American West. She is also the creator and co-founder of Nursing Clio. Jacqueline received her PhD from the University of Michigan in 2018.

I remember my first time fondly. The year was 2010. It was a hot summer day in downtown Denver and I was excited, yet nervous. Would I know what to do? Would I be good at it? What if it was boring? Would I get to wear those cool white gloves? Ah yes, the first trip to the archives is always a special time in a grad student’s life (Hey – get your mind out of the gutter!). I was an MA student at the University of Wyoming and I had traveled down to the Colorado State Archives to do my thesis research on female juvenile delinquency in Progressive-Era Denver. On my way to the archives, I imagined what my first research experience would be like – perhaps I would be sitting in an old, dusty room with only an antique lamp to illuminate my precious manuscripts and documents. Maybe I would make friends with the elderly archivist, who would surely offer me a hot cup of tea. The possibilities were endless!

-New photograph of poet Emily Dickinson discovered.
-“Bullying, Masculinity, and the Spectre of the Fag.”
-Does breastfeeding cause droopy breasts? (thankfully, science has the answer.)
-Speaking of breasts . . . a breast washing machine circa 1930s!?
-Stock photographs of sad babies with their feminist mommies.
-Art, the brain, and neuroscience.

-Sex and polio in the movies.
-Your condoms are not made in Condom, France.
-Oldest message in a bottle found.
-Why abortion apologies hurt the pro-choice cause.
-Ancient Korean love letter unearthed.
-The dangers of deconstructing women.

-19th century beauty secrets revealed!
-The history of New York in 50 objects.
-When they were young – 30 famous historical figures.
-The controversy over the long-awaited Thalidomide apology.
-The gay artist who defined american masculinity in the early-20th century.
-Do we need to redefine the term “disability?”
-Mysterious new virus found in middle America.

The history of the “C Word.”
The G-Spot and junk science.
50 Shades of Grey book burnings.
Dishonoring Custer? Srsly!?
King Richard III may be buried under a parking lot.
The Japanese radical who spied on the Black Panthers.
Dr. Seuss’ colorful story about malaria.

The history of the condom.
Use these old slang terms to impress your friends.
Mascara used to be a lot more complicated.
The stereotype that we wish would go away: Hollywood and the Helpless Husband.
The treadmill prison.
North Korean women can now ride bicycles.
That time when Denver almost exploded.

The history of the wandering womb.
Presidential courtships throughout history.
What day of the week are you most likely to die in a hospital’s care?
Graphing every idea in history.
The history of the exclamation point!
Maps!
New documentary explores death and the Civil War.
Parents eat more fat.
Pubic hair exists for a reason, according to science.

It may come as no surprise that a few of us here at Nursing Clio are big, crazy Mad Men fans (see here). Although I had my early reservations about how the show portrayed women during its first season, I have eventually grown to love the way Matthew Weiner has developed interesting, complex, and strong… Read more →