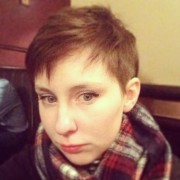 I am Founder & Director at Hollaback! Belfast. I have a Master’s Degree in History and Gender & Women’s Studies from the University of Wyoming. My academic work focuses on the role of women in post-conflict societies, with a particular focus on grass roots activism. I write for a number of feminist leaning blogs, am active in local feminist groups in Northern Ireland and an active speaker on Women & LGBTQ rights.

Last May, the Republic of Ireland legalized same-sex marriage, just 22 years after the decriminalization of homosexuality in 1993. This was put to a referendum in Ireland due to the change to the Irish Constitution’s definition of Marriage. While there are obvious and real issues with allowing a public vote on human rights, the Yes… Read more →

In a strangely prophetic report, the United Nations (UN) committee that monitors states’ compliance with the International Covenant on Civil and Political Rights warned Ireland last month that its poor record on gender equality and on-going human rights injustices certainly would result in continued human rights abuses if strong measures to remedy this were not taken.

Then, just last week, a case emerged that demonstrates how considerable these reproductive rights violations can be. The Eighth Amendment of the Constitution of Ireland, which introduced a total ban on abortion, was enforced on a woman who had become pregnant following rape. Earlier in her pregnancy (the eighth week, in fact), the woman had requested an abortion because she was suicidal and the pregnancy was thus risking her life. Her request was denied. Last week, she was legally forced to give birth at 25 weeks by caesarean section.

A new play opened in Dublin this week called Eirebrushed. Written by Brian Merriman, the play tells the story of Elizabeth O’Farrell, whose role as combatant has been quite literally airbrushed out of Irish history and the 1916 Easter Rising. The Easter Rising of 1916 was a significant rebellion against British colonization and, while it ultimately failed, it sparked a series of events that eventually lead to the independence of Ireland (first as the Irish Free State, a dominion of the British Commonwealth, in 1922, and then as the independent Republic of Ireland in 1948). Elizabeth O’Farrell, a midwife and member of Cumann na mBan (the League of Women), has been described as a “fierce Republican” and played a significant role in the rebellion of 1916. O’Farrell actively fought for the independence of Ireland from British colonization before and during the Easter Rising, delivering bulletins and instructions to the rebel outposts around Dublin. As Eirebrushed brings to our attention, her legacy, and those of other women active in the movement, has been diminished in the commemoration of the Easter Rising and its role in sparking the Irish Civil War.

As Ireland moves away from its uneasy coalition with the Catholic church, the issue of gay rights in Ireland is gaining more traction. The upcoming same-sex marriage referendum has resulted in gay rights being discussed on Irish television. On the January 11 edition of the Saturday Night Show on RTÉ, Ireland’s national broadcaster, Rory O’Neill (aka Ireland’s arguably most famous Drag Queen, Panti Bliss) became the center of a national controversy over gay rights and homophobia in Ireland. During his live on-air interview with host Brendan O’Connor, O’Neill described a number of Irish journalists as well as a pressure group named the Iona Institute as homophobic in their views toward same-sex marriage.

In 1999, Sweden passed the Law against Procurement of Sexual Services, criminalizing the purchase of sex, which punishes johns but not prostitutes. Worldwide, the law is considered a progressive way to improve the lives of sex workers while also combating the root causes of exploitation in the industry. Currently up for debate in Northern Ireland’s government is a similar measure, a new law, titled the Human Trafficking and Exploitation Bill, which seeks to limit human trafficking in Northern Ireland. Clause 6 of this bill emulates the Swedish model in an attempt to criminalize those who pay for sexual services. Problematic, however, is the lack of distinction made between individuals who choose to become sex workers and those who are trafficked.

Last week I spoke at an event for Youth Action Northern Ireland, an organization that strives to make a significant difference in the lives of young people in Northern Ireland. One of the ways they carry out this mission is through their Gender Equality Unit, working “with those young women who are most excluded from resources and society to try to improve their access.” Part of this work is informed by the desire to challenge “traditional expectations of young women,” particularly those which deny their potential and their opportunities.

Last Saturday at an Eminem concert at Slane Castle, outside Dublin, Ireland, a 17-year-old woman was photographed performing oral sex on two males. Unsurprisingly, these photos went viral on Twitter, Facebook, and Instagram. I’ve been hopeful of Twitter and Facebook recently. In particular the discussion surrounding the #solidarityisforwhitewomen trend inspired a lot of thought about what gender and feminism mean in 2013 and has served as a much needed reminder for white feminists like myself to check our own privilege. That spirit of hope has taken a hit with the Slane Girl Story. Within two days of the Eminem concert, Twitter exploded into a slut-shaming bonanza. The hashtags #slanegirl and #slaneslut trends have taken on the appearance of a free-for-all, cruel, glee-filled, slut-shaming stampede.

Last week the British newspaper, The Guardian, reported on a young woman named Jinan Younis, who started a feminist society in her high school in response to a personal experience of street harassment. By rightfully acknowledging how this harassment was part of a wider culture of sexism, she was determined to do something about it: “After returning from this school trip I started to notice how much the girls at my school suffer because of the pressures associated with our gender. Many of the girls have eating disorders, some have had peers heavily pressure them into sexual acts, others suffer in emotionally abusive relationships where they are constantly told they are worthless.” This quote is horrifying.

I was initially motivated to write this piece as a response to the controversy over an anonymous post on a Facebook page, “UW Crushes,” associated with students at the University of Wyoming that read “I want to hatefuck ___ so hard. That chick runs her liberal mouth all the time and doesn’t care who knows it. I think it’s hot and it makes me angry. One night with me and she’s going to be a good Republican bitch.” While the outcome of this storm has been problematic due to legitimacy concerns over who posted the offending comment, the story prompted me to visit the current debate over “LAD” culture in British and Northern Irish universities.

A week ago, Saturday Night Live paid tribute to Prime Minister Margaret Thatcher who passed away earlier that week. The SNL sketch featured Fred Armisen as Ian Rubbish, a Johnny Rotten type, whose dislike for the British monarchy and government inspired punk-rock gems. However, as we learn in this “documentary,” when Margaret Thatcher came to power, Rubbish’s reaction left his band, the Bizzarros, and fans scratching their heads. Expecting Thatcher to be “Rubbished,” Rubbish instead did a 180 and wrote songs praising Thatcher. What in world had come over Rubbish? Well we learn soon enough that his “love” for the Iron Lady developed because, wait for it, she reminds him of his mum. So there is no changing his mind. SNLs tribute reflects a myriad of responses to Thatcher’s death. Not surprisingly, the stormy reaction across Britain and Ireland over Baroness Thatcher’s death hasn’t escaped anyone’s attention. The decision to commemorate or celebrate her death in Northern Ireland in particular, was bound to produce a split in opinion. The relationship between Northern Ireland (and the Republic of Ireland for that matter) and Thatcher has always been tense. Recent revelations from former Northern Ireland Secretary Peter Mandelson about Thatcher’s supposed mistrust of the Irish, and her equally naive and ridiculous Cromwellian solution to the “Troubles” (i.e. to simply move all the Catholics to the Republic) is just the latest in this deeply complicated relationship. Yet, the polarized responses to her death reflect not only her conservative policies that still influence British politics, but also reveal cultural norms and beliefs regarding gender and politics. Thatcher may have reminded Rubbish of his mum, but this reduced Thatcher to being a mum, not a politician, judged not for her (controversial) policies, but for her inability to fulfill feminine expectations.