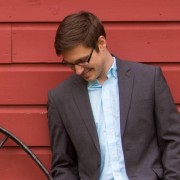 Evan is an Instructor of History at SUNY Adirondack. He holds a PhD in History from University at Albany, and specializes in gender, disability, and war in the twentieth century. He focuses specifically on veteran disability and rehabilitation in the United States following the First World War.

In his 1919 novel The Man Nobody Knew, Holworthy Hall introduced readers to Richard Morgan, a fictional American soldier who enlisted in the French Foreign Legion during World War I.[1] Disaffected from his hometown of Syracuse, New York and a broken engagement, Morgan fought in the war to prove his worth to society. Authorities reported… Read more →

Whether you’ve seen The Hairpin’s 2011 “Women Laughing Alone with Salad,” or not, you’re in for a treat. Emily Contois analyzes this well-known photo essay in a recently published chapter, “Laughing Alone with Salad: Nutrition-Based Inequity in Women’s Diet and Wellness Media,” as part of Food for Thought: Nourishment, Culture, Meaning, edited by Simona Stano… Read more →

Speech specialist Ernest Tompkins was not alone in thinking that he had figured out what caused stuttering. But when Tompkins penned his 1918 Scientific American article, he not only aimed to disprove other theories from his contemporaries, he also wanted to conclude once and for all the very reason why there seemed to be more… Read more →

Vaccination is of critical importance right now. At this moment, the United States is fighting an uphill battle against COVID-19, reaching over 100,000 cases a day and counting. Hospital systems are strained and the country’s morgues are cracking under the pressure of thousands of corpses waiting in trailers for burial. Meanwhile, the vacuum of national… Read more →

In October 2020, CNN host Jake Tapper confronted Lara Trump for a video of what seemed to be her mocking now–President Elect Joe Biden’s stutter on the campaign trail. In the video, Lara Trump was seen saying “Joe, can you get it out? . . . Let’s get the words out, Joe. You kind of… Read more →

During the First World War, a group of British and American military engineers conducted a series of experiments to determine what kinds of dugouts would give soldiers the most protection from high explosive artillery shells. They did so in response to battlefield evidence that dead soldiers had been found with their bodies whole, with only… Read more →

Carrie Buck was three months shy of her twenty-second birthday when she was forcibly sterilized on October 19, 1927. Buck’s fate was based on the 1924 Virginia eugenic sterilization law, which marked individuals for sterilization based on vague and misleading concepts such as immorality, defectiveness, weak-mindedness, and promiscuity.1 Eugenicists, social hygienists, and lawmakers passed state… Read more →

In May 2020, Prince Harry will inaugurate the fifth Invictus Games in The Hague, Netherlands. An international sporting event for wounded, disabled, and sick veterans of modern war that began in 2014, the Invictus Games will bring together five hundred athletes from over a dozen countries competing in events like wheelchair basketball, cycling, and archery…. Read more →

Sarah Handley-Cousins argues in her new book, Bodies in Blue: Disability in the Civil War North, that the bodies of disabled Union soldiers and veterans “were sites of powerful cultural beliefs about duty, honor, and sacrifice,” yet those ideals became complicated with men who failed to perform the socially accepted role of wounded warrior. Her work… Read more →

In September 1919, Mary McKenney was forced to relive the horrors of her husband Arthur’s death. Sergeant Arthur McKenney was wounded in France and returned to the United States.1 Despite his minor injury, he later died at a US Army hospital in Colonia, New Jersey from shock following an operation. After the autopsy, his body… Read more →