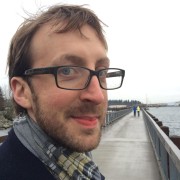 Adam Turner has a Master’s degree in history from the University of Oregon and works as a web developer with a love of clean, standards-based markup and accessible, user-centered design.

Nursing Clio will be on break until January to work on some new and exciting plans for 2016 — and get some rest. It’s been a big year for us here at Nursing Clio. We relaunched back in May with a shiny new website and renewed mission to bring you stories linking the past and… Read more →

One night in August 1966, a group of trans* women and queer youth rioted against years of stigmatization and routine police harassment. It started at a popular all-night hangout, Gene Compton’s Cafeteria, a chain restaurant in the Tenderloin and one of the few places trans* women could relax. In 1966 dressing as the “wrong gender”… Read more →

Spoiler Alert: This isn’t exactly a movie review (if you’d like one, I recommend Alex von Tunzelmann’s review in The Guardian) but it may give away elements of the film. Be forewarned. If you watch The Imitation Game, the Oscar-nominated biopic, you’ll learn that Alan Turing betrayed his country when blackmailed by a Soviet spy… Read more →

With the events of the past months, and as Austin McCoy discussed here on Nursing Clio last week, it should be clear that white privilege is still alive and well in the United States. Despite the optimism following President Obama’s election six years ago, and the Republican Party’s tweets, we do not yet live in a society where the color of your skin doesn’t matter. To make matters worse, while the discussion should be about how best to fix the problems of racial injustice and economic oppression in the United States, substantial numbers of people refuse to even accept that it’s a problem. They prefer to believe that those who suffer from systemic poverty, police violence, and a biased justice system get only what they’ve earned by being lazy, or breaking the law, or acting badly.

On September 24, as I enjoyed my second coffee of the morning and caught up on news, a photo caught my eye. In the image, women in colorful saris congratulated each other amidst massive computer monitors. The exuberance of the photo arrested me — as did the obvious techy setting, nerd that I am —… Read more →

Welcome to the inaugural Nursing Clio Pub Quiz, the “Ye Olde America” edition. I just finished teaching a four-week summer course on US women’s history to 1870, which left my head buzzing with little facts and historical anecdotes about women in colonial America and the early republic. Being a fan of trivia (and a bit of a nerd) I decided the perfect outlet for these snippets of the past would be a blog version of the venerable pub quiz. Let’s see how you do! (No Wikipedia peeking, folks.) Good luck!

Like others, I find the growing humanitarian crisis in Texas deeply troubling. The number of minors making this dangerous journey alone, in search of a better life away from violence and poverty, is overwhelming and heart-wrenching, not least because they’ve been met with more hostility than sympathy at the US end of their long trek…. Read more →

Since as far back as the American Revolution, politicians and the public have welcomed soldiers home from war with promises of cutting edge medical knowledge, comprehensive rehabilitation, and ongoing care as compensation for their service. Just as often, though, these promises have gone unfulfilled in the face of their enormous expense. The history of the veteran’s health system thus has been one of best intentions and poor funding.

The stereotype of historians isolated in archives with dusty papers and dim lighting has more than a grain of truth to it. Granted, my archive experiences have been more ice cold and brightly lit than dank, but the isolation can be striking. I’ve spent entire days immersed more in the past than in the world… Read more →